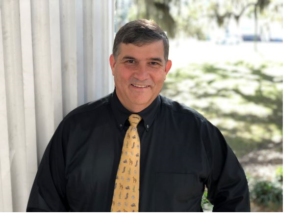 Attorney Robert L. Lambert, Jr. is a native of Gadsden, AL. He received his undergraduate degree in Government and English from the University of Texas at Austin in 1987 where he received recognition for his creative writing ability. He received his law degree from the University of Mississippi School of Law in 1990 graduating fourth in his class. While in law school, he won several scholarships and received the Moot Court Bench Award for legal writing. He has practiced law for 24 years in South Georgia, practicing principally Elder Law and Estate Planning.

Mr. Lambert is an accomplished writer and public speaker and frequently speaks to various organizations on Elder Law and Estate Planning issues. He is a motivational speaker and for many years conducted money management seminars.

Mr. Lambert is a registered Georgia General Civil and Domestic Mediator and Arbitrator with expertise in mediating Elder Law issues. He is certified by the Georgia Office of Dispute Resolution, which means he has the requisite training, requirements and experience as established by the Georgia Supreme Court.

Mr. Lambert was raised on a farm in rural northeast Alabama where he learned the value and benefit of hard work; the necessity of a common sense approach to problems; and the tenacity and determination to overcome any obstacle. He worked his own way through college and law school and not only has a successful law practice but also has many other talents and interests. He is an avid horseman and cowboy and prefers his jeans and cowboy boots over the traditional business suit. He raises quarter horses and draft horses on his farm, CheraOak Plantation, in Barney, Georgia. He is an accomplished builder and jack of all trades and extremely gifted at working with his hands. He designed and built, with his own hands, his home and farm buildings and remodeled his office buildings in downtown Valdosta.